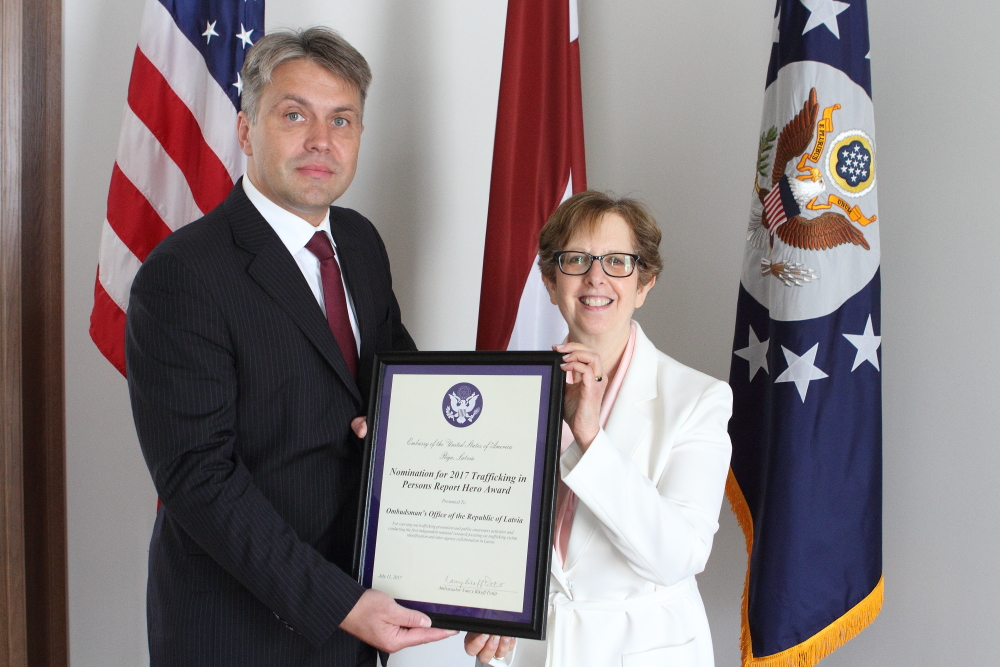 Every year worldwide the US Department of State nominates NGOs, governments, legislators or other bodies for the award. On 12th of July, 2017, the Ombudsman Mr. Juris Jansons received the nomination’s certificate from the US Ambassador in Latvia Mrs. Nancy Bikoff Pettit.

Ombudsman: “It is a real honor to be nominated for this award. Ombudsman’s Office has done a lot to notice flaws in governmental institutions work regarding human trafficking. But we see that state is only on the beginning of a road. The responsible authorities should continue to improve, to think beyond the traditional frames. In addition, the successful inter-institutional cooperation has immeasurable importance so together we could help as many people as possible.”

The Ombudsman’s Office conducted a research “The Role of Local Governments’ Social Services, Orphan’s and Custody Courts and Branch Offices of the State Employment Agency of Latvia in the Process of Identification of Victims of Trafficking in Human Beings”, as a result giving a number of recommendations to the responsible institutions.

Link to the research: http://www.tiesibsargs.lv/uploads/content/publikacijas/trafficking_in_human_beings_in_latvia_1496389389.pdf

Pictures from the event: http://www.tiesibsargs.lv/lv/pages/par-mums/galerija/9